8 Reasons Why People Are Talking About Peptides for Men 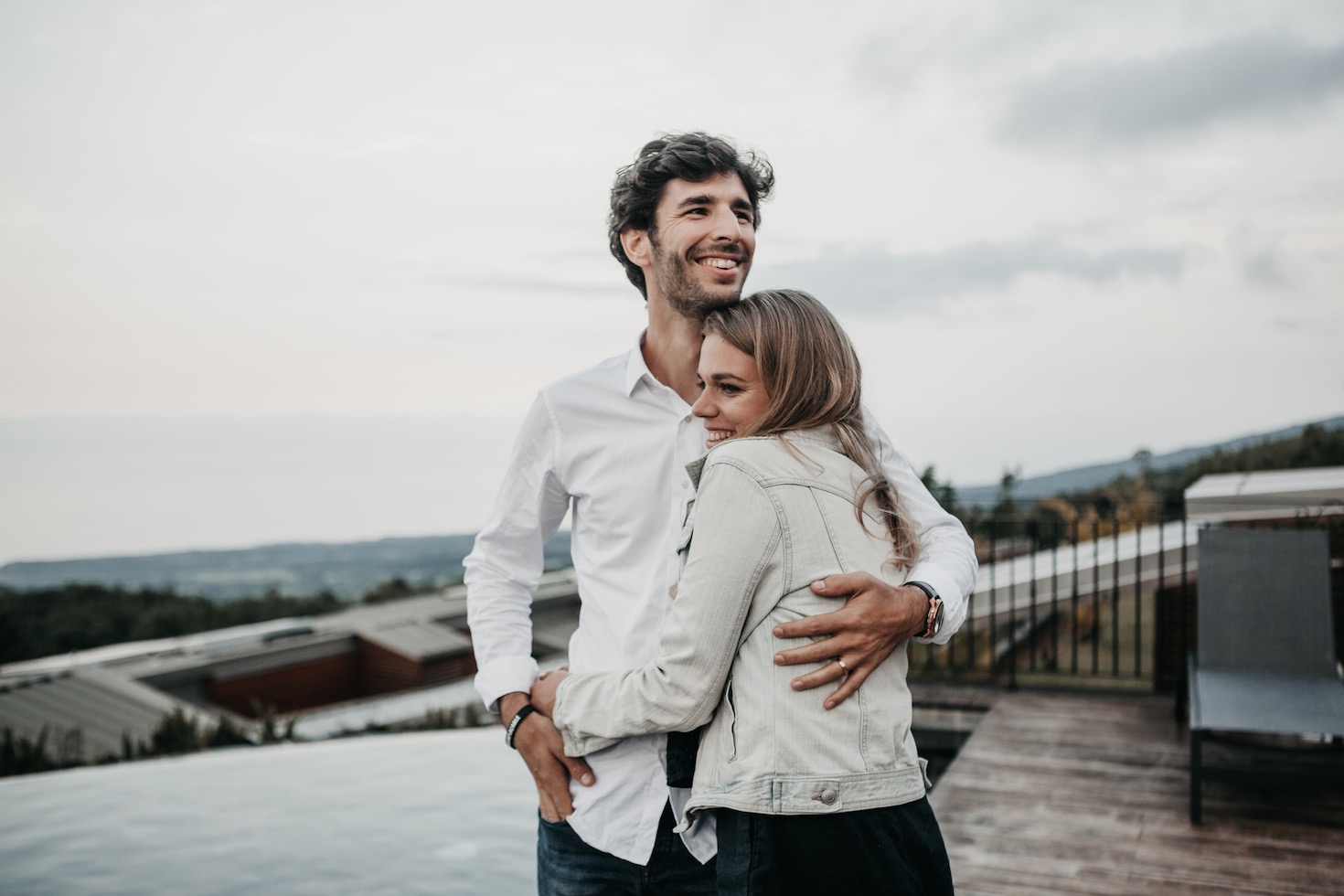 Have you heard the buzz about peptides for men?

There is a lot of exciting research behind how these molecules can help men address many of the health issues they’re most concerned about.

You can choose to “live with it,” or you can be proactive and find out how peptides may help you.

Peptides are similar to proteins, just smaller. Like proteins, they are made up of amino acids, but it takes fewer amino acids to make a peptide than it does a protein.

In the human body, peptides are present in every cell and tissue where they perform a wide range of functions.

They may stimulate hormone production, boost the immune system, fight off infections, regenerate bone and muscle tissue, aid in healing, delay the appearance of aging, improve sexual function, and much more.

In general, peptides are short chains of amino acids (typical between two and 50), whereas proteins have more than 100 amino acids. Your body naturally produces peptides, but as you age, your peptide production slows down and levels decline.

There are thousands of peptides, and there’s extensive research underway to identify what they can do. In this post, we’ll focus specifically on those specific peptides that we know help boost men’s health.

What are Peptides for Men?

In the men’s health arena, peptides are garnering lots of attention because they are producing real results. Those things that you care about—like bulding muscle, improving sexual performance, exercise recovery, losing weight, boosting cognitive function—may be improved by using peptides.

In other words, if you’ve got specific goals you’re trying to reach or you’re starting to feel your age, peptide treatments may be ideal for you.

How do Peptides Work?

Throughout your body, you naturally produce peptides for very specific functions.  Once created, they act as messengers, giving specific instructions to other cells or organs, often telling them to increase the production of something the body needs.

Traveling throughout the bloodstream, they attach to specific receptors to relay information from one tissue or organ to another, Once attached, they “upload” their message, and then the cell or organ responds.

Signs You May Be Low on Peptides for Men

As you age, your body‘s supply of certain peptides diminishes. How do you know whether you’re coming up short?

Ask yourself if you’re suffering from any of the following symptoms:

Though peptide therapy is considered an anti-aging therapy, men of all ages may benefit depending on their specific health goals. The ability to personalize your peptide treatment to focus on certain areas of health and fitness is one of the reasons why peptides have become so popular.

8 Reasons Why People Are Talking About Peptides for Men

Because of the wide variety of available peptides, it’s important to talk to a doctor with experience in peptide therapy before starting to use them. Together, you can determine which ones—and which combination—might be most effective for any issue you want to address. 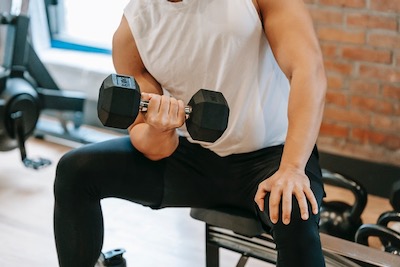 Athletes have long used human growth hormone (HGH) to help build muscle and improve athletic performance. Due to safety concerns, however, it was banned by the International Olympic Committee in 1989 and has been looked down upon in other professional organizations as well.

Peptides have now become a popular alternative to HGH because they can offer similar benefits without the concerning side effects. In a recent 2020 study, researchers noted that these peptides are potent growth hormones and IGF-1 stimulators that can “significantly improve body composition” while improving fat gain and muscular atrophy.

Some peptides effectively help burn fat, particularly visceral fat and fat around the abdomen. Examples include growth hormone-releasing peptides like CJC 1295 and ipamorelin and amlexanox which can improve metabolism and decrease appetite.

In a 2019 review, researchers analyzed studies focused on peptides to treat obesity. They found that many peptides helped decrease body weight while allowing participants to better maintain weight loss. 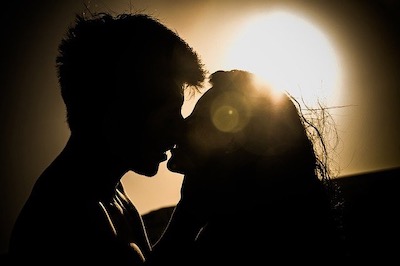 The solutions we have for erectile dysfunction today all operate in the same way—they help increase blood flow to the penis so that you can maintain an erection. They are effective, but they can produce side effects, some that may be dangerous for men with cardiovascular disease.

Peptides that are involved in sexual function operate differently. They are part of the nervous system’s response to sexual arousal. Melanocortins, for example, are peptide hormones that are produced in the brain and are known to be involved in the male sexual response.

In an early study using a synthetic form of one type of melanocortin, results showed that it worked far better than a placebo in helping men to attain and sustain an erection. The researchers called it a “potent initiator of erections in men…”

A later study also found that administration of a similar peptide hormone (PT-141) resulted in a rapid increase in erectile activity—so much so that the scientists concluded that “PT-141 holds promise as a new treatment for sexual dysfunction.”

4. Peptides may speed up your recovery time.

After a hard workout, you want to recover quickly so you’re ready to go again the next day. Muscle, tendon, and ligament damage can slow you down, preventing you from reaching your athletic goals.

Here again, peptides may help. In a 2019 study, scientists examined whether consuming collagen peptides before and after strenuous exercise would help improve muscle and bone recovery. They tested 24 active males who consumed either 20 grams a day of the peptides or a placebo for 7 days before and 2 days after performing 150 drop jumps.

Results showed that 48 hours after exercise, the peptide group experienced significantly less muscle soreness than the placebo group. They also recovered more quickly and were able to perform higher jumps at their next workout. Peptides seem to enhance the normal process of tissue repair, helping to speed up full recovery. 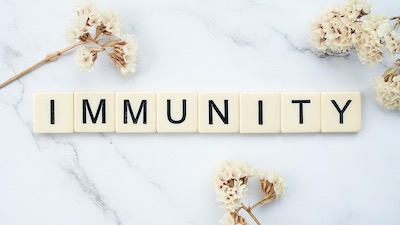 We’re all interested in avoiding infections—even more so today given the recent public health issues.

Several studies have indicated that peptides can help encourage immune function—or calm it down if necessary.

In a 2020 study, researchers reported that certain antimicrobial defense peptides (AMPs) could not only fight off microbes, but boost the immune system when needed, or reduce inflammation in cases where the immune system was overreacting.

An earlier study showed that AMPs were “promising candidates” for use against antibiotic-resistant bacteria. These peptides could help boost the action of some antibiotics against these difficult bacteria, helping the medications to work more effectively.

Other studies have found that AMPs can protect against pathogenic bacteria, fungi, and viruses, potentially increasing your resistance to infections. Peptides that encourage the production of HGH may help too since HGH plays an important role in enhancing the immune response.

We all want to stay as youthful as possible. If you’re beginning to “feel” your age, ask your doctor about peptides.

Preliminary research suggests that peptides may act in several ways to help slow the process of aging. 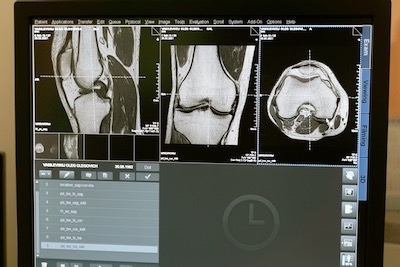 Specific collagen peptides may help to improve bone mineral density (BMD). Though women are more likely to experience bone loss with age than men, men can still be at risk, particularly if they:

In a 2018 study, scientists found that the intake of specific collagen peptides helped significantly increase BMD, which in turn, can help reduce the risk of fractures. The next year, scientists reported again that a collagen peptide solution targeted and modulated the function of bone-remodeling cells, helping to support bone health.

8. Peptides may help you look younger.

Applying a skincare product that includes peptides may help you fade the appearance of lines and wrinkles while delaying sagging.

In a 2020 study, researchers found that the topical application of peptides increased collagen content in the skin, improving wrinkles.

An earlier study also showed that peptides helped reduce the appearance of wrinkles with fewer side effects than Botox. 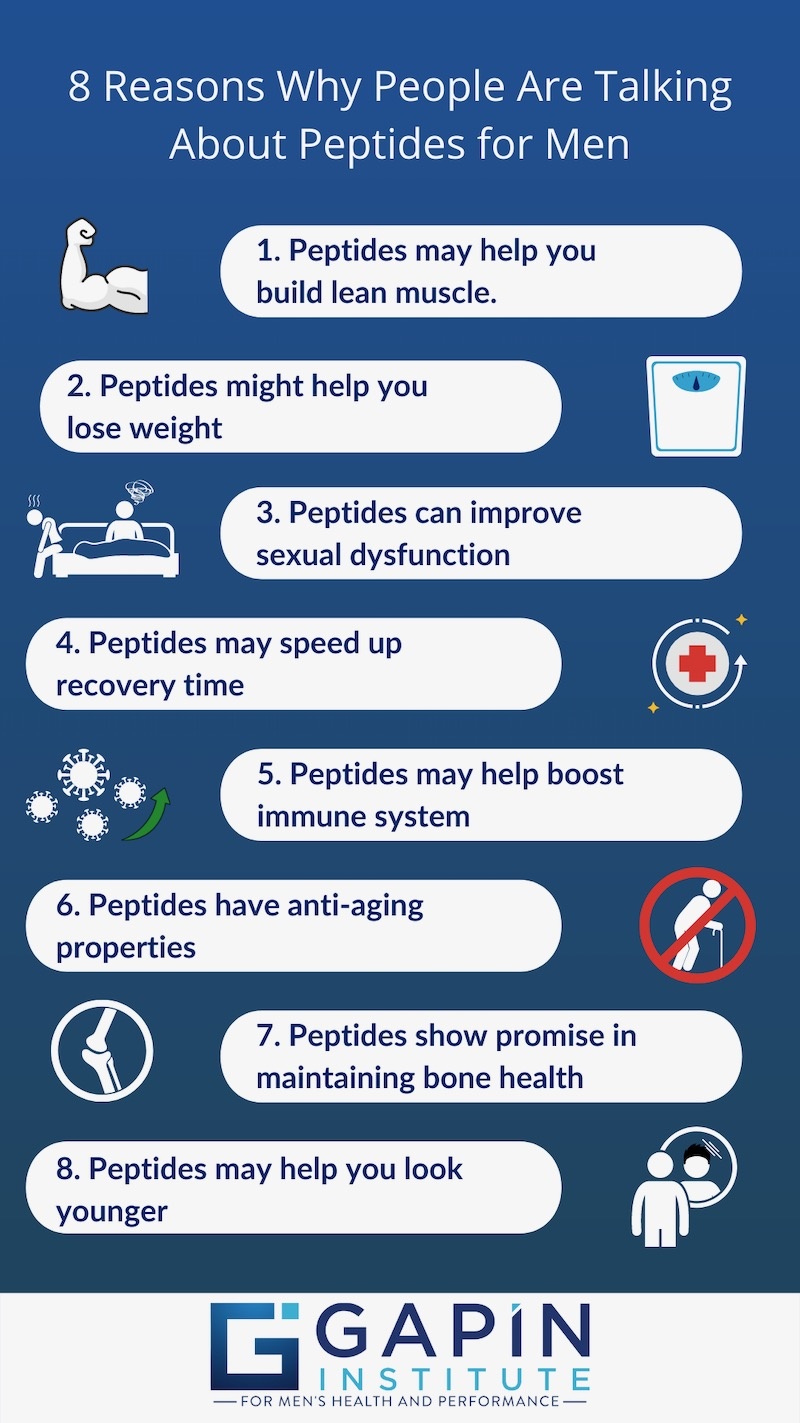 Are Peptides for Men Safe?

Because peptides are naturally occurring in the body and in food, they are unlikely to cause serious side effects in healthy people as long as they are taking in reasonable amounts.

In a recent review of the scientific literature, researchers stated that the peptides available today “show negligible toxicity,” while another review reported that peptides have a “good safety profile” with a promising future in human health.

It is important to note, that the U.S. Food and Drug Administration (FDA) does not regulate supplements in the same way they do medications. Manufacturers are not required to study the supplements and then submit clinical data. As long as they use approved ingredients, they can market their products as they please.

For this reason, it’s important to work with a doctor who has experience with peptide therapy and can prescribe peptides from a reputable compounding pharmacy with top-notch quality assurance.

What Are the Most Commonly Used Peptides for Men? 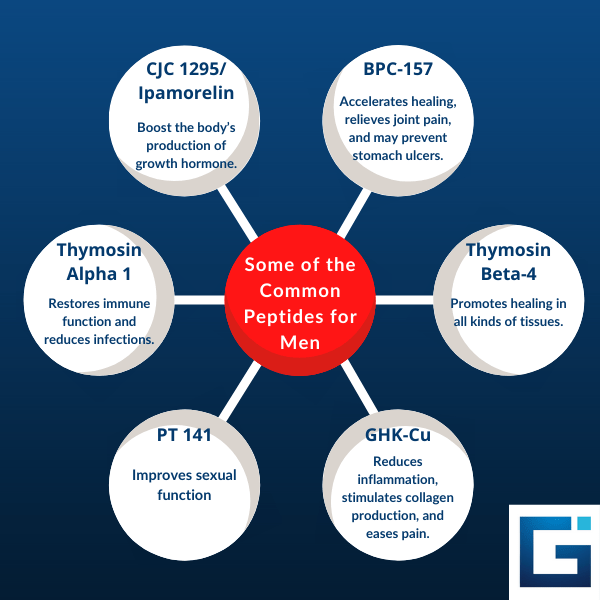 Below are some of the most common peptides used today in men’s health. It’s important to note that peptide therapy is individualized to each man. Work with your doctor to discuss which ones may work best for you.

Boosting production is a key part of an overall anti-aging strategy.

An examples of peptides that promote the release of HGH include ipamorelin, sermorelin, and CJC-1295.

Together, these two peptides can increase muscle mass and strength and improve recovery time—helping you get more out of your workouts.

Fifteen amino acids come together to form this peptide, which was discovered in human gastric (digestive) juice. BPC-157 reduces gastrointestinal, systemic, and joint inflammation. It has been found to accelerate healing, including tendon and bone healing. It may also help prevent stomach ulcers, relieve joint pain, and decrease damage in muscle strains and tears.

Scientists have been researching thymosin alpha for over a decade. It stimulates improved immune function by optimizing T cell immunity.

This peptide is naturally produced in larger amounts where tissues have been damaged. Its primary function is to promote healing in all kinds of tissues. These include those in the eyes, muscles, tendons, heart, and skin.

Also known as Bremelanotide, this is a synthetic peptide that mimics the natural peptide alpha-MSH (alpha-melanocyte-stimulating hormone), which is produced in the brain. It works to help increase sexual desire and improve erectile dysfunction. Because it operates through the nervous system rather than the vascular system (like Viagra and Cialis do), it may be safer for some men with diagnosed heart conditions.

How Do You Take Peptides?

Depending on your recommended type and dosage, you may take peptides through various routes. These include subcutaneous injections, oral medications, and topical creams.

Should You Use Peptides for Men?

Peptide therapy can provide amazing benefits. Talk with a doctor experienced with prescribing peptides to determine which ones are right for you.  They will consider your health status, performance goals, and other factors before  the best type of peptide therapy for you.

If you’re curious about how you may benefit from peptide therapy, schedule a free consultation with a men’s health advisor today.

Complete the form to request a Free Consultation with a Gapin Institute Men’s Wellness Adviser today! Get Your FREE Male 2.0
Performance Blueprint